Today, Hells Headbangers announces Halloween as the international release date for Acid Witch‘s highly anticipated fourth album, Rot Among Us, on CD and cassette tape formats. The digital version will be available on October 1st while the vinyl version will follow later. In lieu of this announcement, the brand-new track “5508 Martin St.” can be heard HERE at Hells Headbangers‘ official YouTube channel.

By now, Acid Witch require little introduction. Since 2007, the Detroit crew of mischievous miscreants have patiently crafted an ever-singular sound that’s equal parts doom, death metal, psych rock, and horror-movie soundtrack. And while their full-length discography is semi-sparse, each Acid Witch album is a momentous event, showcasing another dark ‘n’ delirious side to these Halloween-obsessed savants.

Then again, since the release of 2017’s Evil Sound Screamers, Acid Witch have certainly stayed busy on the short-length front, not to mention founding frontman/keyboardist Slasher Dave’s soundtrack-oriented solo work. That latter element comes ever more to the fore on the band’s fourth full-length, Rot Among Us. That preceding album surely emphasized those synths, as well, bringing the band’s beloved horror canon of the ’70s and ’80s into sharper focus, but Acid Witch top even that with Rot Among Us. Much, much darker and deadly serious but somehow clearer and more drug-crazed, Rot Among Us shows Acid Witch in rarefied form, retaining their core sound but lacing each of these 10 anthems with a lysergic sense of starpower that’s simply larger than life. A devilish sense of fun prevails, as it always has in the Acid Witch world, but they take these arena-ready anthems in a gutsfucking and grimy direction that’s absolutely DARK at the very, bitter end – and all of it’s threaded together with acutely filmic samples, making that path to that end like a movie itself.

Featuring their best production to date, courtesy of Slasher Dave, and mind-bending cover artwork courtesy of his longtime partner Shagrat, Acid Witch‘s Rot Among Us is the timely rallying cry of all Halloween horror hounds!

In the meantime, hear the brand-new track “5508 Martin St.”  HERE at Hells Headbangers‘ official YouTube channel. Preorder info can be found HERE. Aforementioned cover art and tracklisting are as follows: 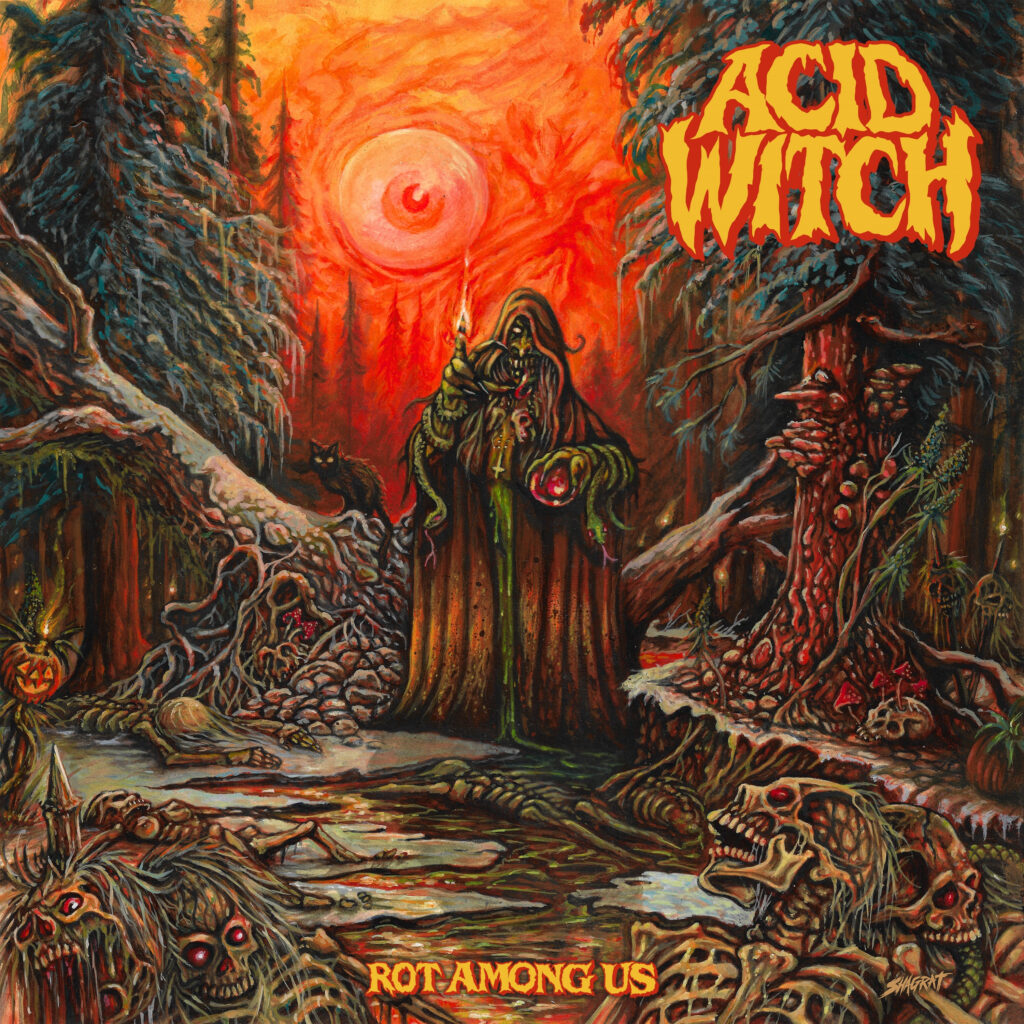