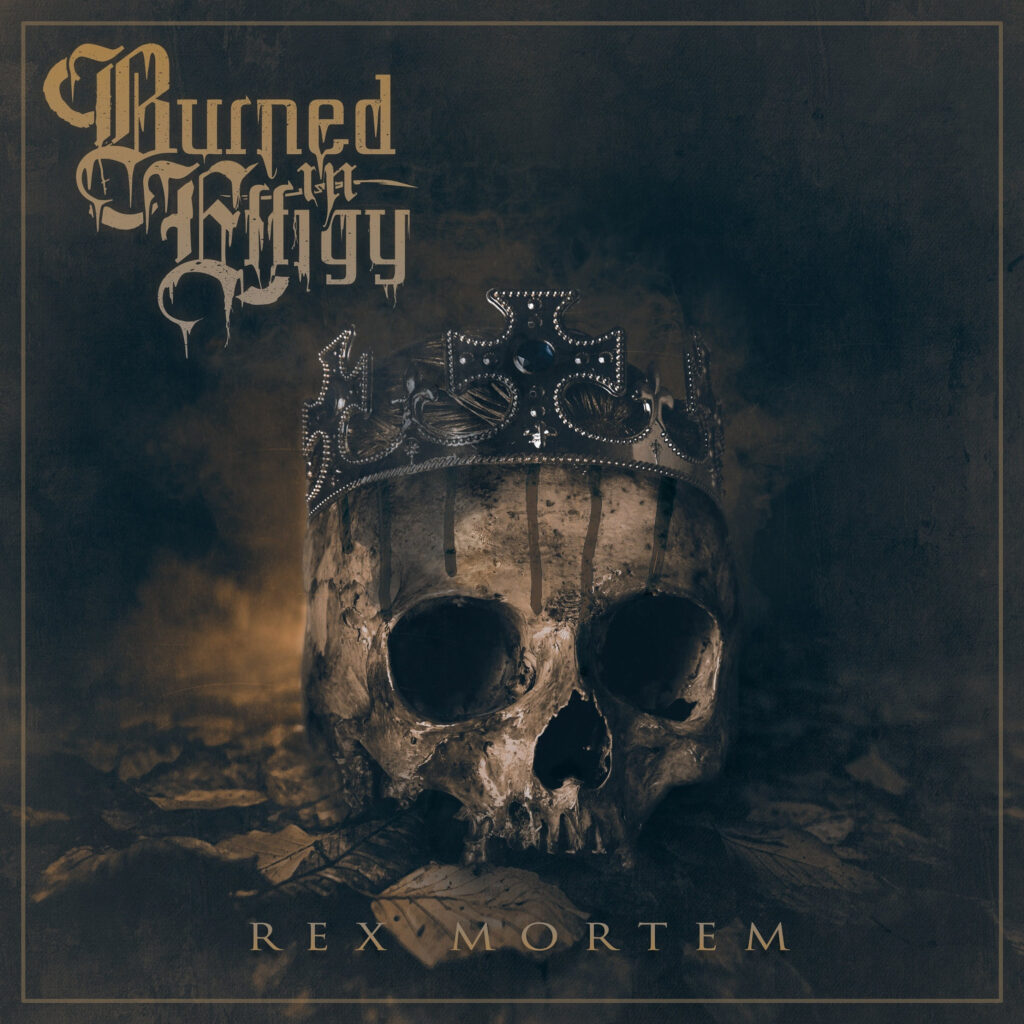 Chicago’s BURNED IN EFFIGY will be unleashing their new album “Rex Mortem” on Friday, January 28, 2022 to follow their debut EP “Terrestrial”. Unlike their debut recording, which was all instrumental, this first full-length from the band will see not only new guitarists Mike Hisson and Steve Bacakos on the lineup, but also witness vocalist Mark “Smedy” Smedbron discharge his earworm fury unto the masses. The three new members join co-founding members Eddie Dec (Drums) and Matt Watkins (Bass).

Before the album officially drops, the band has teamed up with EverythingIsNoise for the full stream premiere of “Rex Mortem”, which can be heard at the following link HERE.

Lyrically, the album is the introduction of a tale of a tyrannical king’s rule and demise, including some other minor themes and stories from mythology and classic literature. Musically, the album is high-energy, but also diverse. It takes elements from multiple subgenres within metal, mainly melodic death and progressive, while infusing neoclassical elements into each track. No two tracks sound the same. Burned In Effigy skillfully and tastefully changed keys and time signatures throughout, so the feel of their music is constantly shifting, but also smoothly flows between each section.

“We are psyched to present our debut album, Rex Mortem, a catalog of the first chapter of the band. This has been in the works for a long time and we couldn’t be more pleased with how it has turned out. The songs vary in complexity and intensity and demonstrate our growth as a band since its inception.

Listeners will hear influences such as The Black Dahlia Murder and The Human Abstract, combining our love for death metal and progressive/neo-classical metal. The vocals are gritty and tense and the lyrics emphasize this with dark tales inspired by mythology, history, and classic literature. We believe our album has something for all metal fans, regardless of preferred subgenre.”

Album pre-order for “Rex Mortem” is available at Burnedineffigy.bandcamp.com (CD) and all other major digital platforms at https://distrokid.com/hyperfollow/burnedineffigy/rex-mortem.

​Burned in Effigy is a neoclassical melodic death metal band from Chicago, IL. Formed in late 2016 by founding members Brad Dose (guitar), Vito Belino (guitar), Eddie Dec (drums), and Matt Watkins (bass). Starting as an instrumental melodic metal band, the four were brought together by their love of complex, melodic, and heavy music and sought to bring more of that to the Chicago extreme music scene.

Burned in Effigy released their debut EP, Terrestrial, in April 2017. The band focused on playing shows after and building an audience through top-notch live performances while opening for prominent bands such as Scale the Summit, Angel Vivaldi, Oh, Sleeper, and Mushroomhead. While supporting this EP, Burned in Effigy worked with a couple of different vocalists and eventually recruited vocalist Mark “Smedy” Smedbron in December 2019 while in the early demo stages for their first full length.

Instrumental recordings for the band’s masterpiece, Rex Mortem, were finished in early 2020. Shortly after, the band parted ways with guitarist Brad Dose. Vocal recording, mixing, and mastering was finished in mid 2021, after which guitarist Vito Bellino left in order to focus on music school. Shortly after, the remaining three members Eddie Dec (drums), Matt Watkins (bass), and Mark “Smedy” Smedbron (vocals) rallied and recruited guitarists Mike Hisson and Steve Bacakos, who naturally fit with and complemented the band’s signature sound.