New York’s SANHEDRIN have just debuted a new video from their current album, Lights On, that was released Worldwide last March through Metal Blade Records.

Comments SANHEDRIN singer Erica Stoltz: “I wrote the song about an archeological discovery in Russia late December 2019. A tomb was found with the skeletons of four Scythian women warriors aged 12 to 50. They had battle scars and were buried with weapons and horses. It was the best example of pre-Christian female identity I’ve ever seen. The song was my tribute to them, a way to bring their spirits into a new age, continue their story and show what women are able to do.“

As for the video itself, it was animated and directed by Mike “Fox” Foxall, a dear friend from the band hailing from Australia. “We met Mike at the 2019 edition of Hell Over Hammaburg when our band and his (Neptune Power Federation) played together. We instantly hit it off as friends and so working with him for the video was an extension of our friendship. We feel the video captures the energy and themes of the song while also providing a unique visual look and narrative to the listening experience. RIDE OUT!!!“

SANHEDRIN are confirmed to play reknown German festivals “Hell Over Hammaburg” and “Keep It True” in the Spring and have just announced a full trek with none other than ROSS THE BOSS. Full dates below. Comments the band: “We are beyond excited to head back to Europe this Spring. Our appearances at Keep It True and Hell Over Hammaburg have been delayed multiple times, so we are grateful for the day to finally arrive where we can perform at both of them!

We are also looking forward to hitting the road with fellow New Yorker and guitar legend Ross The Boss! He is a true rock pioneer and heavy metal icon, and on this tour he will be celebrating his storied career with a ‘Kings Of Metal’ anniversary performance. It’s been a long time since our last full-scale European tour, and we can’t wait to see you all at the show!“

Further European dates will be announced shortly, make sure to watch the band’s socials! 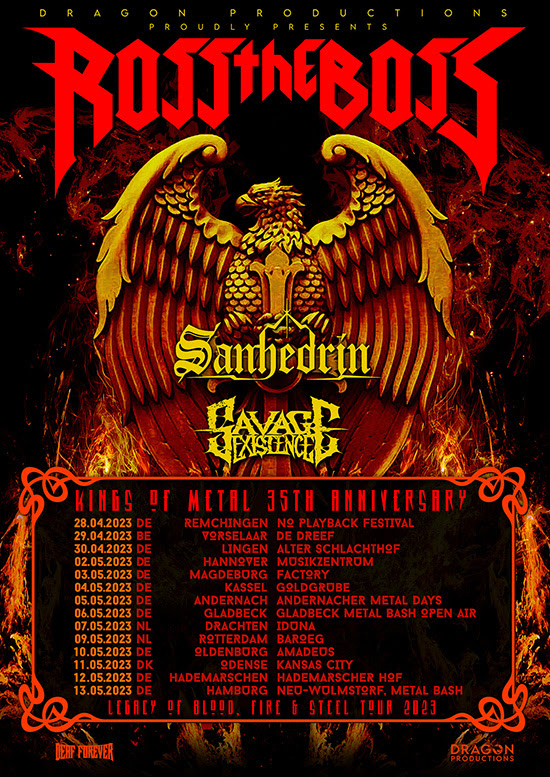 The Brooklyn power trio do metal the old school way, channeling the greats that preceded them to create something that is instantly familiar yet with a new, modern energy to it. Their newest effort Lights On topped several year-end lists in magazines all over Europe! Stream Now and purchase Lights On at: metalblade.com/sanhedrin