Over the course of fifteen years, DOWNFALL OF GAIA has carved a unique space for themselves within the metal scene, evolving naturally and unafraid to take risks. With Silhouettes Of Disgust they progress in part by looking backwards and returning to familiar territory. The result is best described as a textured, dynamic blend of crust punk and post-black metal with a lot of atmospheric elements, taking everything that ever made the band compelling and pushing it in new and gripping directions. With the return of guitarist Peter Wolff, who left the band in 2015 to focus on family and other pursuits, the writing process was much more streamlined than the sixteen months spent penning 2019’s Ethic Of Radical Finitude. “We started in October of 2021 and went into the studio in April of 2022,” notes vocalist/guitarist Dominik Goncalves dos Reis. “Having Peter back — who founded DOWNFALL OF GAIA together with bassist/vocalist Anton [Lisovoj] and I in 2008 — was the big difference this time. For Ethic Of Radical Finitude And Atrophy (2016), I prepared all the guitars by myself before the four of us started working on all the details, which is a much longer way of working than doing everything as a couple.“

Wanting to keep things short and simple but straight in the listener’s face, the record does not feature the eight- to ten-minute epics of their more recent releases and is indeed punchier, with a lot of classic d-beat drumming driving the action, as on opener “Existence Of Awe” and the surging “Unredeemable.” They have also expanded their sonic palette with the inclusion of synths for the first time, and female vocals courtesy of Lulu Black, who collaborates with drummer Michael Kadnar in industrial/gothic project This Is Oblivion, making her voice familiar to the band members.

The album title, Silhouettes Of Disgust, is derived from the narratives driving the songs, focusing on the stories of eight different people, as residents of a fictional metropolis, each with their own worries and struggles. “Loneliness, addiction, the fear of tomorrow, pressure from society/work and others, things that many of us probably know all too well,” explains Goncalves dos Reis. “You have to play along somehow, or you fall through the cracks, and once you’re down, it’s hard to get back up. It looks at selfishness and ignorance, the general way of dealing with each other – you’re one, surrounded by millions, surrounded by all these silhouettes of disgust, surrounded by the things you want to avoid and hate. The last few years have impressively proven what you can expect from humanity, and honestly, it’s not much.“

In advance of the record’s release, today the band unveils a video for first single, “Bodies As Driftwood.” Offers Goncalves dos Reis of the track, “‘Bodies As Driftwood’ tells the story of a fictional person in a fictional big city who, under the cover of night, can finally be herself and escape the ever-increasing malaise of everyday life. Hopes and dreams quickly give way to reality and threaten to break down due to outside pressures: Unpaid bills, problems at work, no social network, loneliness, no help, total overwhelm in a constantly accelerating zeitgeist… But at night she feels free – no punishing glances from others, no outside pressure, no stress, no expectations, just herself in the darkness while the world sleeps. Metaphorically speaking, this person uses the darkness of the night as a protective veil. Although this person is surrounded by millions every day, she experiences absolute loneliness on a daily basis.“

View DOWNFALL OF GAIA‘s “Bodies As Driftwood” video at: youtu.be/LSG65xPl58Y

Silhouettes Of Disgust will be released on CD, LP, and digitally. Find pre-orders at: metalblade.com/downfallofgaia 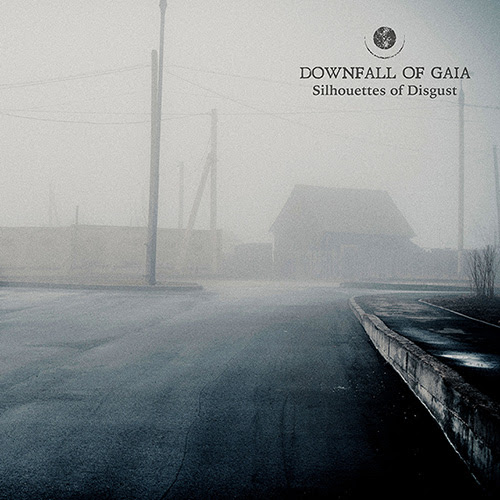 Silhouettes Of Disgust was initially slated to be recorded with producer Timo Höcke at Die Wellenschmiede studio in Hamburg, however a few days before recording was due to commence, Höcke unfortunately contracted Covid. “Due to schedules, family matters and private life, the planned time frame was the only chance to record the album without losing several months, so with drums tracked in New Jersey at Backroom Studios together with Kevin Antreassian, we ended up recording the rest of the album alone in Peter [Wolff]’s studio in Hamburg. After recording guitars, bass, and vocals we went to Die Wellenschmiede for one day — as it was actually planned — and re-amped our own recordings, with Timo handling the mix and Jonas Romann (Chaos Compressor Club) mastering the record.” The record comes adorned in the cover art of Wolff and Goncalves dos Reis.