Blackened death thrash practitioners GOATWHORE are pleased to unleash “Death From Above,” the fiery new single off their long-awaited new full-length, Angels Hung From The Arches Of Heaven, set for release on October 7th via Metal Blade Records!

Marching into their twenty-fifth year as master architects of the most ruthless extreme metal, with Angels Hung From The Arches Of Heaven GOATWHORE spews forth forty-seven decimating minutes of the band’s trademark brew of death, black, thrash, and classic metal delivered with breathless intensity and an unapologetic bloodlust.

The title of the record – like all of the band’s releases – is both deep and direct. Notes vocalist Louis B. Falgoust II, “It’s a mixture of esoteric ideas and biblical scripts; the rise and fall of the self and how the abyss can be a turning point for some and a passageway to oblivion for others.” Lyrically, Falgoust draws from a wide-ranging assortment of inspirations. Latest album teaser, “Death From Above,” is loosely based on the “Nachthexen,” or Night Witches, a group of female Soviet aviators in a bomber division deployed in 1942, a period during which women were in fact barred from combat. 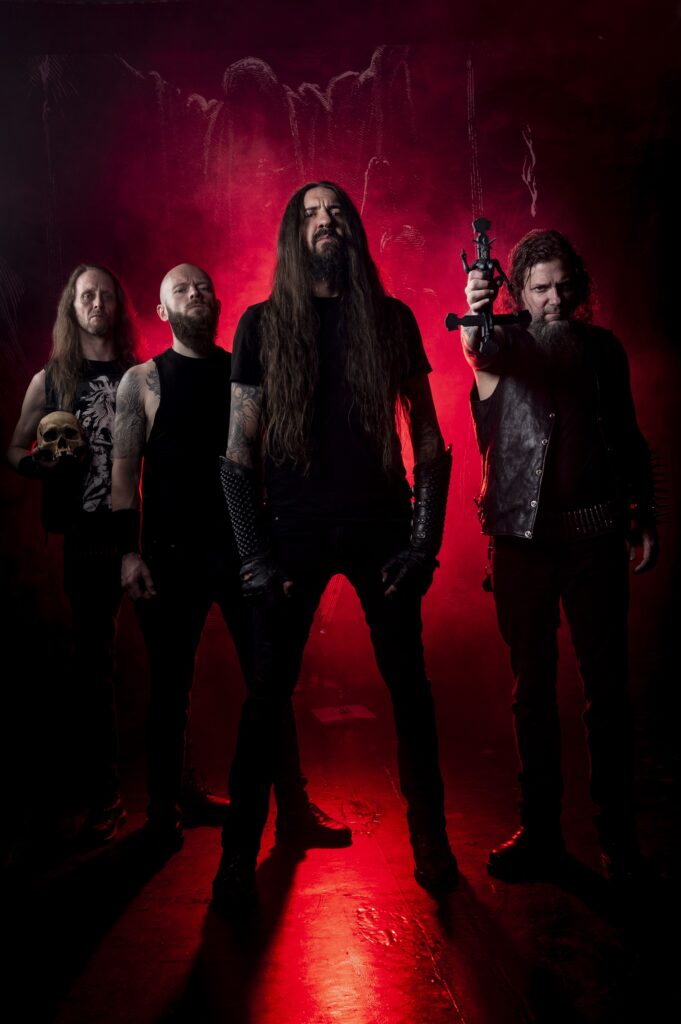 Angels Hung From The Arches Of Heaven was produced by Jarrett Pritchard (Exhumed, 1349), who handled the band’s Vengeful Ascension full-length, and tracked primarily at Studio In The Country in Bogalusa, Louisiana under pandemic restrictions. Additionally, the band recruited acclaimed producer Kurt Ballou (Converge, High On Fire, Gatecreeper, Code Orange) to mix the record with final mastering duties handled by Grammy-award winning engineer Ted Jensen (Ghost, Gojira, Cult Of Luna). The record is tied together by the striking artwork of longtime collaborator Jordan Barlow who’s cryptic use of sigils holds deeper meaning to the record’s entirety.

Unquestionably their fiercest, most accomplished album to date in sound, concept, and execution, the twelve-track Angels Hung From The Arches Of Heaven stands among the most volatile and plainly dangerous records to come out of 2022. Featuring ferocious beasts like the maniacally thrashing “Born Of Satan’s Flesh,” the oldschool, crossover flavored “Death From Above” with its guttural chorus, and a towering title track that’s as haunting as it is heavy, the band – Duet, Falgoust, drummer Zack Simmons, and bassist Robert “TA” Coleman (his first recorded output with the band) – covers a wealth of sonic terrain while preserving their signature, nefarious GOATWHORE aura. With an overall tone described by Duet as “dark and evil” with a perpetual sentiment of “impending dread,” the record allows little light to cling to.

“…a blood-spewing banger that harnesses everything that makes this band exciting in one tight package. The interplay between frontman Ben Falgoust’s diverse array of growls and guitarist-vocalist Sammy Duet’s goblin shrieks is terrific, and their masterful transitions between black-metal speed, thrash riffage and just plain ripping death metal heaviness is unmatched.” – Revolver on “Born Of Satan’s Flesh“

“A vicious brew of blackened thrash and death metal is GOATWHORE’s M.O., and ‘Born Of Satan’s Flesh’ hits that multi-genre intersection at blinding speeds. Guitarist Sammy Duet rains down precision riffs while frontman Louis Ben Falgoust II spouts blasphemies through his bellowing snarl. The accompanying performance clip offers a glimpse at what it would be like to witness the brutality live.” – Consequence

“…one of the gnarliest blackened death metal bands ever.” – Denver Westword

“One of the hardest working bands in all of metal. GOATWHORE is always on tour, always great to their fans, and always giving it all they got. There are no duds whatsoever in their entire catalog and guitarist Sammy Duet is one of the very best there is. These guys should be playing arenas.” – MetalSucks’ 14 Metal Artists Who Should be Much Bigger Than They Are Column 2022