Iconic American tech death metal band ORIGINis premiering a music video for the title track off its upcoming album, “Chaosmos”, set for release on June 3rd via Agonia Records (Europe) and Nuclear Blast Records (rest of the world). The video, directed by David Brodsky of My Good Eye Music Visuals, can be watched at this address:

ORIGIN is currently co-headlining a North American tour with Misery Index through May 22nd, and will kick off their album release tour with Abysmal Dawn before long (check full dates below).

John Longstreth (drums) commented on the video: “Have you ever wondered if Origin can perform in an empty warehouse? Here’s your chance to find out!  We’re super excited to work with the video wizards at MyGoodEye once again. We had a ton of fun filming this thing! Enjoy Chaosmos!”

The long-standing outfit celebrate not only their eighth full-length installment, but also ring in their 25th year on “Chaosmos.” The same fury, brutality, and musical savvy that brought ORIGIN critical acclaim and a devout fanbase on “Unparalleled Universe” (2017), “Antithesis” (2008), and “Origin” (2000) returns with reinvigorated intensity, passion, and skill. In 2022, the group – Paul Ryan (guitars/backing vocals), Mike Flores (bass/backing vocals), John Longstreth (drums), and Jason Keyser (lead vocals) – are undeterred by unprecedented roadblocks and global uncertainty as they push forward. Indeed, ORIGIN’s new-era shock and awe mission is complete on “Chaosmos.”

“The music of Origin is a fusion of order and disorder. Our music is viewed as a meaningless assemblage of infinite perspectives,” posits guitarist/vocalist Paul Ryan with cosmic import.

Formed in Topeka, Kansas, in 1997, ORIGIN have eight full-length albums to their name. The group buzzed early with their 1998 EP, “A Coming into Existence” (re-released and re-recorded from scratch in 2019 on Agonia Records, as part of the “Abiogenesis” release). Fans of high-caliber death metal and record label representatives had noticed. It was after ORIGIN joined luminaries Nile, Cryptopsy, and Gorguts on the 1998 “Death Across America” tour that a monster was unleashed. In 2000, ORIGIN signed to Relapse Records, issuing four full-length albums in “Origin,” “Informis Infinitas Inhumanitas” (2002), “Echoes of Decimation” (2005), and the Billboard-charting “Antithesis”. While on the label, the group gigged incessantly, appearing on such notable tours as “Death Across America 2000”, “Relapse Contamination Tour 2008”, “The Summer Slaughter Tour North America 2009” and several successful European runs. Additionally, guitarist/vocalist Paul Ryan was listed on Decibel’s Top 20 Death Metal Guitarists list in 2007. ORIGIN’s subsequent albums “Entity” (2011), “Omnipresent” (2014), and “Unparalleled Universe” garnered praise in Metal Hammer, Allmusic, and Exclaim!, while occupying prime slots on the “Occupation Domination 2012,” the “Devastation on the Nation”, and “The Hell Over Europe” tours. “Chaosmos” yet again sees ORIGIN’s technically apt death metal in scarily superlative form.

“It’s our third album with the same lineup,” Ryan says. “And I personally feel it’s a continuation of who the band is currently. At the start of 2021, people started talking about a new Origin album, and I wasn’t sure if the world was literally ready for it due to lockdowns/restrictions. In March, I told myself, ‘I will write one song per month until I finish the album.’ When it was completed, I sent over what I had written to the rest of the band. From that point forward, our collective alchemy resulted in what you hear on Chaosmos.”

“Chaosmos” is the tip of ORIGIN’s newly honed spear. Fronted by the frenetic “Ecophagy,” stabbed mid-way through by vicious duo of “Panoptical”/ “Decolonizer,” and capped by the ominous coda of “Heat Death,” this is some of Paul Ryan’s most riveting guitar work to date. Drummer John Longstreth – known for his highly dexterous playing style – also shines throughout, but he’s imposing on “Cullscape,” “Cognito, Tamen Non Sum,” and the reality-blurring title track. The triple vocal attack of Jason Keyser, Ryan, and Flores is also an ORIGIN original. The three-headed beast of Keyser/Ryan/Flores effuses sounds that are at one end hellishly subterranean and at the other horrifically otherworldly. Whereas most death metal buries bass frequencies into the din of the guitars, bassist Mike Flores is expertly all over and in-between his fellow bandmates – ”Panoptical,” for example, is masterclass finger work – on “Chaosmos”.

“Chaosmos is who we are,” says Ryan. “Everyone in death metal has copied our style and techniques. Then, tried to call them their own. Origin just is what it is and what it needs to be. I had nothing but blank pages for this album, and then the word ‘Chaosmos’ kept ringing in my head for about six months. We all suffered during the pandemic, and I personally was in a dark place. Thankfully, the music was a positive release of negative energy.”

That vitality manifested itself deeply in the lyrics for “Chaosmos”. Whereas previous full-length, “Unparalleled Universe”, explored cosmosophy and had tendrils of inspiration from Frank Herbert’s “Dune,” “Chaosmos” is more ominous. For all the pain, suffering, joy, and accomplishment humanity faces, it’s relatively nothing in the front of the universe’s gaping maw. Frontman Keyser dissected the insignificance of everything we hold dear – from life and death to Earth’s very existence. He posits that we’re simply nanoscopic against the vast nothingness beyond our feeble atmosphere. Throughout “Chaosmos,” Keyser tackles the subject at different angles.

Says Keyser: “In the words of Lovecraft, ‘We live on a placid island of ignorance in the midst of black seas of infinity, and it was not meant that we should voyage far.’ On ‘Ecophagy,’ we explore the ‘devour and move on’ mentality of the billionaire pipe dream of colonizing other worlds after we’ve drained our own to a husk. ‘Cogito, Tamen Non Sum,’ Latin for ‘I think, yet I am not,’ delves into the rise of artificial intelligence, ripping an unsolicited consciousness from the nether, like a Boltzmann brain spontaneously becoming aware of itself and the horrors that surround it. ‘Cullscape’ and ‘Panoptical’ look into the rise of the despotic machine and humanity’s brutality towards itself. These all culminate in a final crescendo, ‘Heat Death,’ the final stage of the universe, where the last stars are snuffed out of the sky, and all our strife and efforts are finally revealed for what they have always been, utterly insignificant. Ultimately, that is the theme of Chaosmos. The cosmos is chaos. We must accept our end.”

ORIGIN re-tapped Kansas City-based studio guru Rob Rebeck (Unmerciful, Vänlade) to engineer, produce and mix “Chaosmos”. The production team holed up in GFM Recording Studios in Blue Springs, Missouri and Chapter 2 Recording in Lenexa, Kansas, over 14 days. Rebeck worked the mix over four days, while Colin Marsten at Menegroth in Queens, New York, mastered “Chaosmos” in two. The goal was, as always, to preserve yet expand upon ORIGIN’s savage signature, and that’s precisely what Rebeck and Marsten achieved. If “Unparalleled Universe” was the crawling insanity that is Nyarlathotep, then “Chaosmos” is the crushing tentacles of Cthulhu.

“The studio sessions are always super-high stress – unprepared madness,” Ryan says. “There is some improv magic that happens because of it, too. I feel like something great comes out of the aggression in death metal, and if you’re happy laying down tracks, maybe you shouldn’t be recording death metal. Origin bends but doesn’t break when in the studio.”

When ORIGIN broke out of the heartland in the aughts, death metal had no idea what was coming. A new era of brutality was born. Now, many years later, the outfit are ready for another round of redefinition on “Chaosmos”. They’ve blazed trails few could barely conceive, they’ve achieved more than they ever thought possible (the track “Finite” has two million YouTube views), and ORIGIN continue to innovate and enervate all. Be warned… the inevitable end is near with “Chaosmos”.

“Push play and hold on for the next ride,” says Ryan. “We hope you enjoy it as we do! Ad Astra Per Aspera. Vincit Qui Patitur.” 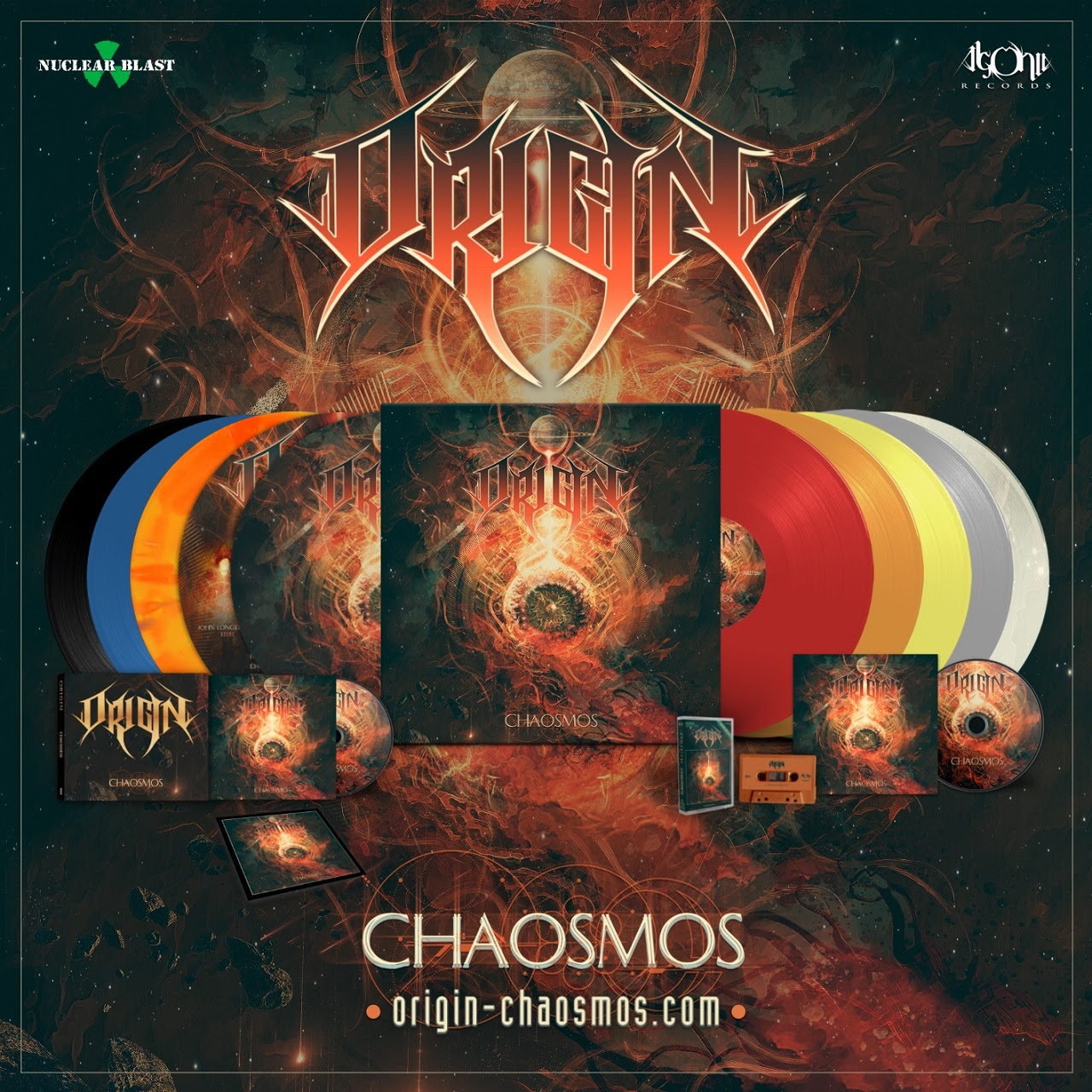