Heavy Metal pioneers ANVIL have announced the release of a brand new studio album, entitled Impact Is Imminent, due out on May 20, 2022 via AFM Records!

The Canadian trio belongs to one of the most distinctive bands of their genre, often cited as having influenced notable metal acts such as Slayer, Megadeath, Metallica or Anthrax. After 40 years in the music industry, touring the world in sold-out venues, and garnering critically acclaim for Anvil! The Story Of Anvil – the number #1 music documentary of every metalhead – the iconic band returns with their nineteenth album.

On Impact Is Imminent, ANVIL fires off merciless riff attacks, relentlessly driving drums and impressive bass grooves, complemented by vocal melodies and lyrics that inevitably drill themselves into the listener’s aural tract. As always, Kudlow and founding member and drummer Robb Reiner, are at the epicentre of this heavy metal extravaganza. For the past eight years, they have been supported by bassist Chris Robertson, who not only complements the ANVIL fold on a personal level, but also enhances the tracks with his powerful low frequency bass parts and backing vocals.

Today, ANVIL shared a first single alongside a music video for the full pedal-to-the-metal anthem ‘Ghost Shadow’! Says charismatic frontman Lips: “Ghost Shadow is my 6th sense telling me I’m being watched! Could be internet trolls or paranormal phenomenon! Either way the song is heavy as fuck!!“

“None of our previous albums blends music and lyrics into as tight a unit as ‘Impact Is Imminent’,” enthuses Lips on the fourteen songs on the group’s new album. “Everything comes together homogeneously. As a result, the new material sounds monolithic, right down to the very last details, both in terms of rhythm and harmonies. In the past, our studio sessions were sometimes like a little like jumping in at the deep end, with us having to improvise a lot and making decisions at short notice. Working on ‘Impact Is Imminent’, not only was there plenty of time for the songwriting process in the run-up to the recordings, but I also had the leisure to put all my ideas to the acid test and work on them until they were perfect.”

Like its three predecessors ‘Anvil Is Anvil’ (2016), ‘Pounding The Pavement’ (2018) and ‘Legal At Last’ (2019), ‘Impact Is Imminent’ was produced by Martin ‘Mattes’ Pfeiffer (U.D.O., among others) and Jörg Uken at Uken’s Soundlodge studios, so the successful combination consisting of Anvil/Pfeiffer/Uken has struck again.

The album pre-sale of Impact Is Imminent, available as CD, Vinyl and Digital formats on May 20, 2022, has just started at THIS LOCATION! 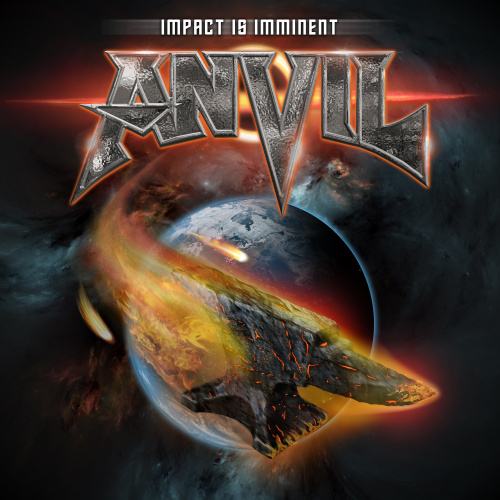