New York City black metal collective BLACK ANVIL is now streaming their brand new album, ‘Regenesis,’ in advance of the releasedate, which is due on November 4 via Season of Mist. The record can be heard in its entirety HERE.

In addition, BLACK ANVIL will be embarking on a full North American tour in support of CANNIBAL CORPSE along with DARK FUNERAL and IMMOLATION starting tomorrow, November 3.

The band comments: “Tomorrow we set out on our first North American tour in four years supporting ‘Regenesis.’ We are extremely proud to finally present this to the world.”

The album can be pre-saved on all streaming services HERE.

The artwork for ‘Regenesis,’ which was created by Metastazis, can be found below along with the tracklist. 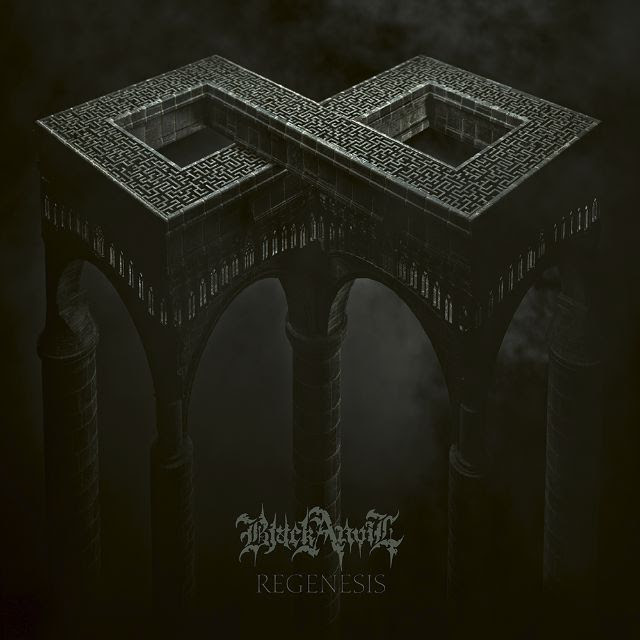 New York City has always served as a cultural epicenter for musical innovation. Even more so than incubating genres in their infancy such as hardcore and even glam metal, for which bands like Twisted Sister and KISS long set the stage before the Sunset Strip took the reigns, the empire state has a storied and unique history of taking genres whose roots lie elsewhere and making them its own; whether it be Anthrax reinventing Bay Area thrash, Suffocation and Immolation planting their flag as death metal purveyors at a time when it was a primary export of Florida, or bands like Blondie and the Ramones rivaling the British punk scene, the city has always been at the forefront of musical excellence. And when it comes to New York’s answer to black metal, Black Anvil have not only been a driving force for USBM, but have taken the black metal genre as a whole and made it entirely their own. Now, with full-length number five, the band has once again leveled up their game, presenting a “regenesis” of black metal.

Here you have 12 tracks of unrelenting yet thought provoking evil, sure to have you take a second & thoroughly re-examined view of what you thought black metal was supposed to be. “This is a more stripped down and aggressive song writing approach. Having time to digest ‘As Was,’ to understand where we were then versus where we are now was key. We always focus inward with our writing, never wanting to repeat ourselves, while also not losing our identity in a stretch to sound different,” explains Black Anvil bassist/vocalist P.

Challenging the norm has always been a core part of Black Anvil’s DNA since their formation in 2007. Upon the release of their debut full-length, Time Insults the Mind, the band quickly garnered the attention of Relapse Records and were presented with a deal. When it came to album number two, the band diverged from the typical approach of their contemporaries and sought an unlikely counterpart to render their vision, tapping engineer “General” George Fullan (The Rolling Stones, Dream Theater) at Mark “The Animal” Mendoza’s (Twisted Sister) Diamond Drop Studio on Long Island, NY. Released in September 2010, sophomore offering Triumvirate received much critical acclaim, notably being revered as an “all-around monster metal album.”

Four years after its release, Triumvirate was followed by Hail Death, a 70-minute journey of intensity that further established Black Anvil as a modern black metal powerhouse. The album was met with praise by publications including Noisey, Pitchfork, Stereogum, Metal Injection, and many more. With the album’s success, the band’s profile rose as they were tapped to participate in numerous prominent tours with black metal legends such as Mayhem, Watain, Urfaust, Marduk as well as dates with Aura Noir, Nachtmystium, Immortal, Eyehategod, Cannibal Corpse, etc. Additionally, the band has appeared at various prestigious festivals including the Scion Rock Fest, Beyond The Gates in Bergen, Norway and the renowned Roadburn Festival in The Netherlands.

In 2017, Black Anvil dropped their fourth studio-album, As Was. Atmospheric and melodic without relenting on any of the ferocity that the collective has always been known for, As Was seamlessly weaves through eight monumental passages of extreme metal art, more diverse, complex, and thought-provoking than anything they’ve done before. The record proved itself to be a stellar representation of modern black metal and of Black Anvil’s continuous progression and songcraft.

Now, nearly six years after As Was made its mark, Black Anvil is returning with its aptly titled fifth full-length, Regenesis. With a new record label, a new album, and a newfound exploration of dark and black metal, Regenesis represents a new dawn for the New York City collective. “The concept is renewal, as well as the process/journey to get here outgrowing our past,” explains P. “Black Anvil has always been a departure from our past, a vehicle for us to grow as individuals, like a snake constantly shedding its skin. We don’t look  back, but never forget.”

Make no mistake, Regenesis is not a departure from Black Anvil’s identity, but rather serves as the latest progression in the band’s ever-evolving sound. The record takes what As Was did best and does it even better. The unrelenting and polished aggression hangs in the balance above dark melodic passages, presenting a dynamic soundscape that serves as the band’s most devastating and existential offering to date. As it’s evident that the band pulls inspiration from unlikely corners, they defy all genre standards and make one thing clear – this isn’t just black metal, this is NYBM.