Spanish thrashers HOLYCIDE, are not willing to throw in the towel with their 2nd album “Fist to Face“, which was released in February 2020, coinciding with the start of the pandemic and therefore they have not been able to perform a single presentation show for it. For this reason, the band wants to make every effort to relaunch the album for the presentation shows that will take place in 2022 thanks to their recent incorporation into the ranks of AREA 51 METAL‘s management.

To support this re-launch, HOLYCIDE is going to release a series of 9 animated lyric-videos, one for each album track, except for the one for which a video-clip has already been released, which will also be re-launched, as well as the lyric that they already did too. There will be 10 videos that will be released, in the same order that they appear in the album, every several weeks and where attention can not only be focused on each one of them, but also on the message of their lyrics.

“Fist to Face” is an incredible album of pure Thrash Metal, intense, technical and aggressive, with which HOLYCIDE finally wants to break the invisible barrier on the national scene, where both for media and promoters, festivals, and even fans, it seems that there are only two bands, forgetting a bit that there are also many others of great quality and honesty, that deserve some attention & recognition. 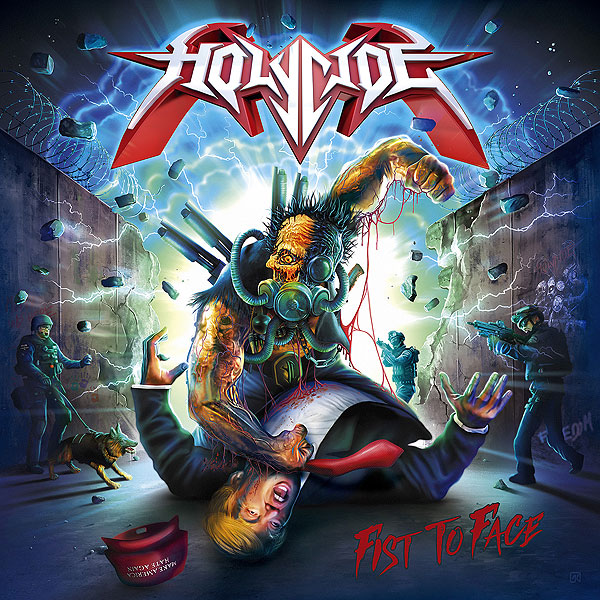 “Fist to Face” was released in February 14th, 2020 through Xtreem Music on CD, 12″LP and Cassette formats, and also through MDD Rec. for the German territory (G/A/S) and Spiritual Beast Rec. in Japan (February 12th).

“Fist to Face” was recorded again in the Cadillac Blood Studios with Andy C. and the cover art has been made by Akirant Illustration, who currently work with IRON MAIDEN for many of their designs.

Tracklist for “Fist to Face” is as follows:

Release date for “Fist to Face” was February 14th, 2020 through Xtreem Music on CD, 12″LP & Cassette formats and also through MDD Rec. for the German (G/A/S) territory and Spiritual Beast Rec. for Japan (February 12th). You can visit HOLYCIDE’s official site here: www.facebook.com/holycide