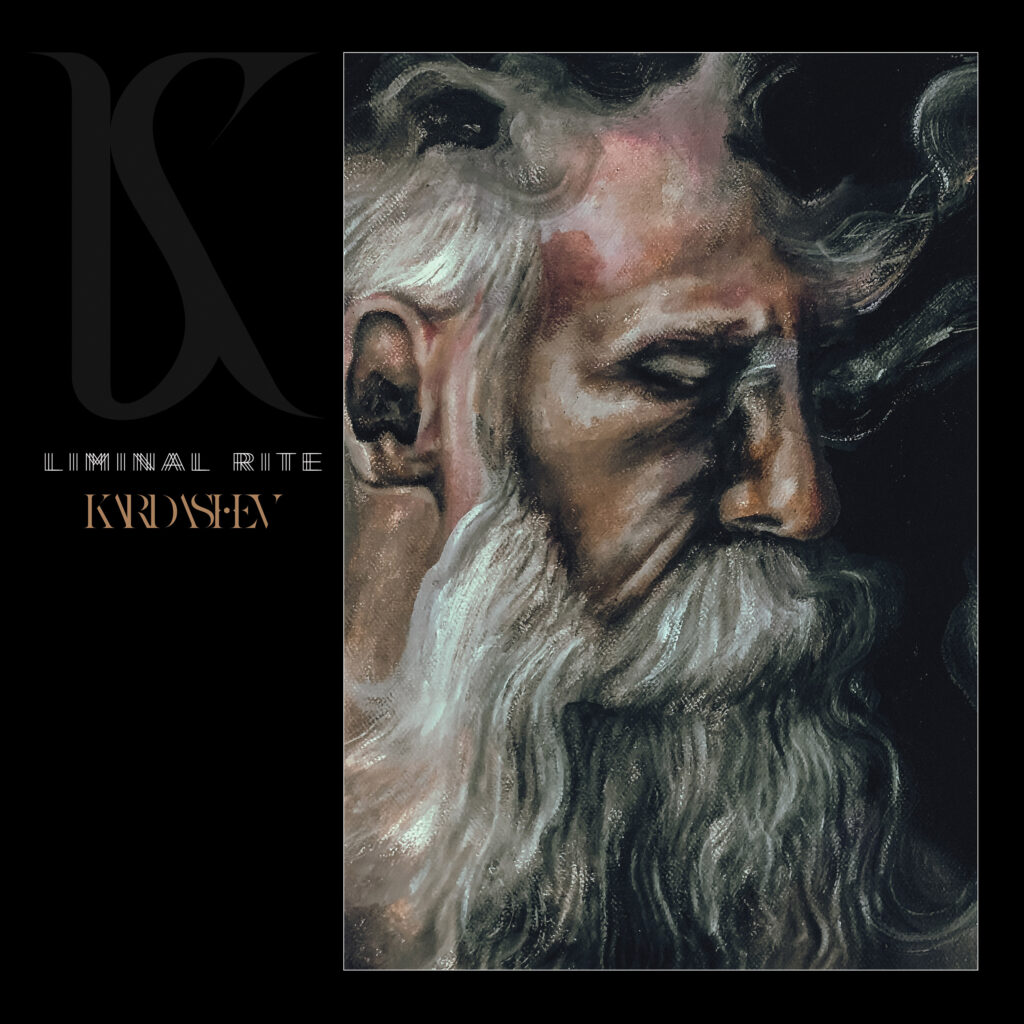 Forged in 2012, KARDASHEV‘s mission statement could best be described as, “Attempting to create the most beautiful, heavy music through themes of love, loss, and altruism in the metal spectrum.” The band dropped their debut full-length Peripety in 2015 and has since focused on short form concept records, most recently 2021’s stirring The Baring Of Shadows. Rarely approaching the creation of a record with any preconceptions or plans as to what form it will take, they work until what they generally envisaged manifests itself. The result is this year’s Liminal Rite featuring eleven deeply rousing, poignant, and musically grandiose tracks.

Opening with the gorgeous drones of “The Approaching Of Atonement” before launching into the densely layered, surging “Silvered Shadows,” an air of tragedy looms over much of the record’s proceedings demanding an emotional response at every musical turn. Liminal Rite is lyrically deep and complex, focusing on mood above all else. Guitarist Nico Mirolla aptly describes the songs as musically bearing resemblance to freeform jazz or a progressive record, because, “The story is the focus. There is an overtly important narrative taking place that is facilitated by the sonic textures and qualities intentionally designed for it.“

The record follows a narrative laid out by drummer Sean Lang’s spoken word parts. Elaborates Mirolla, “Liminal Rite explores how the past can both wound and seduce, leading us down a path of self-destruction. It’s an anecdotal tale from a fictional man’s perspective late in life on how perception and reality do not always coalesce. His experience tells a larger message of how our minds often create a false view of the past. Sean’s narration is him expressing the man’s perception and recollection of life. The failure of his memory, the nature of dementia, and how it plays into his experience are all encapsulated by the narrative sections.“

While Lang simply speaks his parts, vocalist Mark Garrett possesses a phenomenal vocal range, branching from the heavenly and frail to multiple different extreme metal styles, and he follows his gut instincts when it comes to deciding which to employ. “Nico, [bassist] Alex [Reith], and Sean write music that is heavily focused on emotional storytelling, Garrett notes. Because of this, and since I write vocals once the rest of the song is complete, I find myself both swept away in the emotion of the song and wanting to help further the cathartic experience of the listener even more.“

In advance of the record’s release, today KARDASHEV unveils a vocal playthrough for the album’s first single, “Compost Grave-Song.” Notes Mirolla of the track, “‘Compost Grave-Song’ illuminates the point of no return in The Lost Man’s descent into regret, anger, and madness. He is lucid. He is awake. The Lost Man finds himself standing in the spot where his father knelt so many years ago. Guilt masked by anger grabs him by the chest and he curses the earth beneath him. The death of his brother rises to the surface of his mind as a cloud of locusts swarms a field, ripping and tearing until all hunger is satiated. He clutches a stone and sees the ghostly effigy of his father’s hand doing the same. Images of the tragedy that took his brother away flood The Lost Man, and he remembers the fury of his father as the truth was laid bare. But… what was it, that grave mistake that manifested by his own actions? The memory is too far in the ground, buried under broken glass and isolation. But this time will be different. This time he will not be cast aside. He is home, and he would rather die than suffer the loss of his past for a second time.“

With drums tracked in Lang’s home studio, KARDASHEV returned to Endless Gate Audio in Arizona to track guitar, bass, and vocals. They then gathered at The Sound Lair in Tennessee – the first time this lineup has ever been in the same room together – to work with producer/mixer Miah Lajeunesse. The album was mastered by Ryan Williams. The band also brought in Bohren & Der Club Of Gore‘s saxophonist Christoph Clöser — which was a life goal checked off for Mirolla — to add an extra flavor to haunting, epic closer “Beyond The Passage Of Embers,” and Christopher Blaney added some piano parts alongside those of Rieth. The members also pushed themselves into new territory: Garrett recorded his own vocal harmonies rather than relying on a vocoder as on previous releases, Rieth recorded some piano parts, and Lang penned and recorded the spoken word story that haunts the record. The album comes cloaked in the cover art of Faith Veloro.