How was the recording and production process for There’s Only Black? The album sounds definitely more organic and solid than Avé, do you agree with this impression?

I do agree… I think that’s primarily based on the fact we had an actual drummers performance on this release. We basically did a lot of Avé with Mantas composing the music and then I spent time in Portugal recording bass and vocals where we also completed lyrics together and then production along with an engineer guiding aspects of production… He also worked on the pre-programmed drums to give them a more realistic feel as the drummer at the time simply couldn’t deliver in the studio to match the song quality… We were advised by management and label that aspect needed to be addressed and improved or the release would be affected , so we were left with no choice. On the new album, things were different, we completed 24 songs and the 12 that appear were composed 6 by Mantas and 6 by myself… Then we had Warmachine do all drums and his own mixes in his studio in Florida and return the completed works. The freedom to just perform and create for each of us was evident and so we could each just play instinctively as we felt the music. After so much touring together this meant we could read each other and play our parts the most effectively. By doing it all the way we did it, we produced a very much more organic feel of who we are as individuals and as a three piece. Mantas made the production more intimate, dry, real band, in your face. Less frills and more bludgeoning power like our live shows and I liked that… Of course it divides the 2 albums somewhat but both are without a doubt Venom Inc.

Which topics have you guys been exploring in the lyrics?

I think basically the world we live in. Mantas’ death-experience is where I took the final title. He saw “Only Black” and he wrote the title track as his experience and once he showed me the song I took that as the title track as it was a powerful piece which seemed to have such a huge meaning to everything we question as humans in life. The other material is as usual with us really, some personal like Don’t Feed Me Your Lies or Nine, about people we know or How Many Can Die and Tyrant which deal with the destructive nature of mankind against himself. Of course there the pull of the dark side with songs like Inferno or Come To Me but even those are less about little red tailed devils and more about our life journeys and how we struggle to keep a good heart when the clouds amass upon us to turn our souls black.

Can you tell us something about the dark and minimal artwork?

The universe and all life is energy, beyond the light caused by that energy is darkness, the black. The original title was Nine (based on Dante’s Inferno) and I had the cover idea of the Nine Golden circles but after Mantas presented the track There’s Only Black I had a rethink and the cover is the result. No logo appears only a death head stone font I discovered on a mausoleum.. It is part of the theme and the logo simply didn’t work but distracted really, the logo appears inside the album art but it wasn’t right on the cover, simply that. The minimalist image is the Black Hole surrounded by electro energy representing the everything, the light against the darkness. It’s kind of an invitation, much like pondering the depths of a black hole, what’s inside? Well, take the journey and find out. It may unmoved you, disturb you, or save you, but nothing will happen if you do not take that journey, perhaps you’ll find Only Black or maybe you will find your own light (answer) The cover seems simplistic, however to understand it, is to find knowledge… It is provoking…

How is working with Nuclear Blast Records in 2022?

Perfect. They understand us and allow us the freedom to create with guidance where we need it but also they have given us such amazing support: I’m forever grateful and humbled.

What can you tell us about the RockMark incredible re-issues of the Demolition Years’ albums?

Ah those are (for myself) one of the greatest achievements… I couldn’t have done it without the help of BMG. For 15+ years I tried wrestling the masters free to re-issue and failed… I was combatted at every turn but in life if you want to win you just keep working hard and never give up. To then get the license to reproduce all into superb box sets (all sold out in all formats in 24hrs it so on release) was incredible and my partner (Vadim) at RockMark was so supportive and helpful I couldn’t have done it in the superb way it turned out without his great work. All are now available as separate celebratory re releases and BMG placed them all up on Streaming platforms . After so long these much loved and sought-after albums can be heard… Best feeling in the world,..

Can you share a few thoughts about each release from the Demolition Years? Their meaning back then, their meaning nowadays.

Well, each as individual may be too much but let’s just say for the whole collection is the same. Some back in the day had greater meaning but now as each is reissued, I realised by the massive fan response that even those pieces I thought were ok but not so special, I was wrong. They call them classics now and the irony of that is that back then, the metal world was reducing in size, weighed under by grunge, brit-pop and nu metal, etc. And now with a total resurgence and the fact that there was a long period that some people wanted them buried, they are more popular and were sought after than they ever were, so keeping the recording unreleased worked the reverse of what current Venom had wanted. I’m happier now than I think I ever was at the time and to give to several million fans what they’d been looking for for so many years? Well, you can’t do better than that right?!

Are you satisfied with the recent re-issue of The Waste Lands? What does this particular album mean for you?

Very much. That album, I hated the cover, I had Steve White (the original Atomkraft guitarist) play on and I think I wrote most of the album as Mantas was working so had less time to commit, or perhaps was less inspired by all by then. I hated (and still do) the poor cover art as it has zero meaning to the music but was never given any option to opinionate on the art until handed finished product, so was too late by then. I suppose I saw it as more progressive in some ways but only now in hindsight so I realise it’s importance in the bands progression.. I remastered all as the sound was never the most coherent (like Temples Of Ice) and kept the original artwork so did as little as possible to alter its feeling from the time and I think I achieved that with the help of RockMark on the art side and Jack at Enormous Door in Texas

Is there a possibility to witness an Atomkraft comeback one day? Same with M:Pire Of Evil?

Yes!! Actually finishing some track demos now and recording starts Xmas on the new Atomkraft album finally with shows coming 2023. M:Pire, we’d love to just finding space but I believe 2023 the album Unleashed may be completed.

A final message and greetings to your italian friends and fans?

Grazie, Grazie Mille for your love and support from my first ever show in Rome 1985 to now. My heart is always with you and I am so very grateful and honoured by you… AVE!! 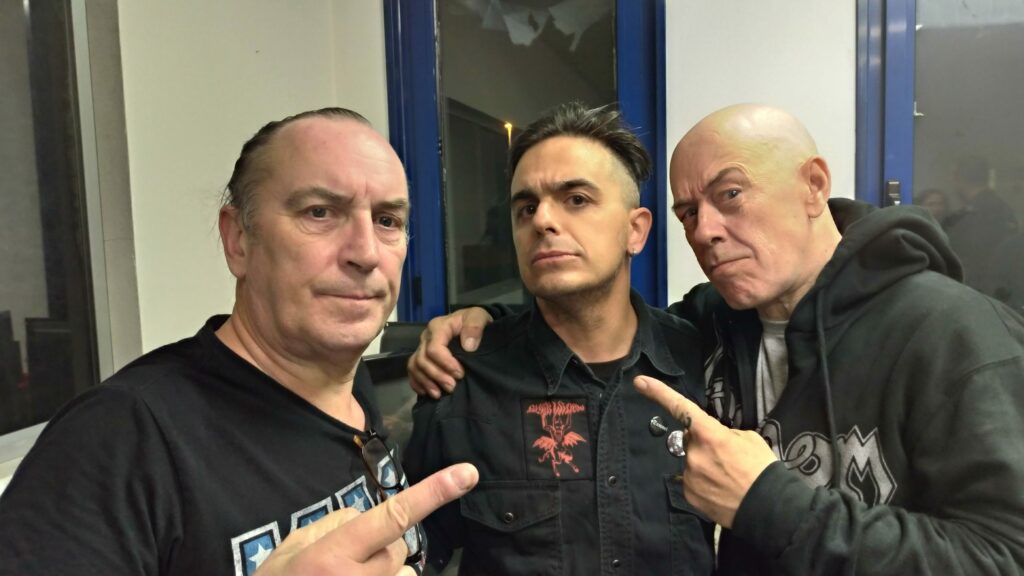