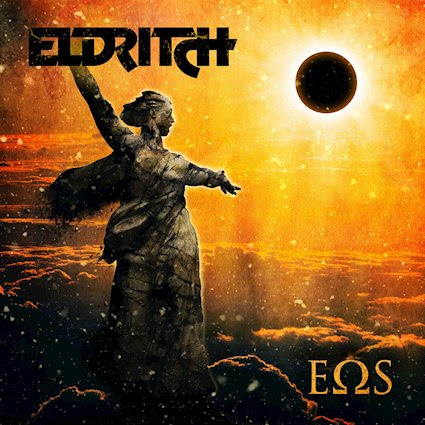 Hard to believe, given the exquisite quality of the entire back catalogue, but this new & unique mixture of early progressive rock elements and modern metal sounds – with hints of AOR, thrash, classic and electronic music – is the Eldritch all-time peak.

You can hear some early-era Genesis mixed with an aggressive, Swedish-like riffing; the vocal lines of frontman Terence Holler are quite original and combine influences picked from a large variety of styles too.

The entire work has been produced by the mastermind, main songwriter and guitarist Eugene Simone. The band also welcomed back keyboard player Oleg Smirnoff after 20 years, as he was a key member of their acclaimed first three records in the 90’s.

‘EOS’ is the goddess of the dawn in Greek mythology and the album sounds “classic Eldritch” and yet so contemporary: call it a second youth or, much better, just great music written and performed by a very skilled and confident ensemble.

– Over the years Eldritch successfully performed live at some of the most important progressive metal festival, like ProgPower Usa, ProgPower Scandinavia and Ready For Prog? (France)

– First edition will be released in a 4-panel digipack