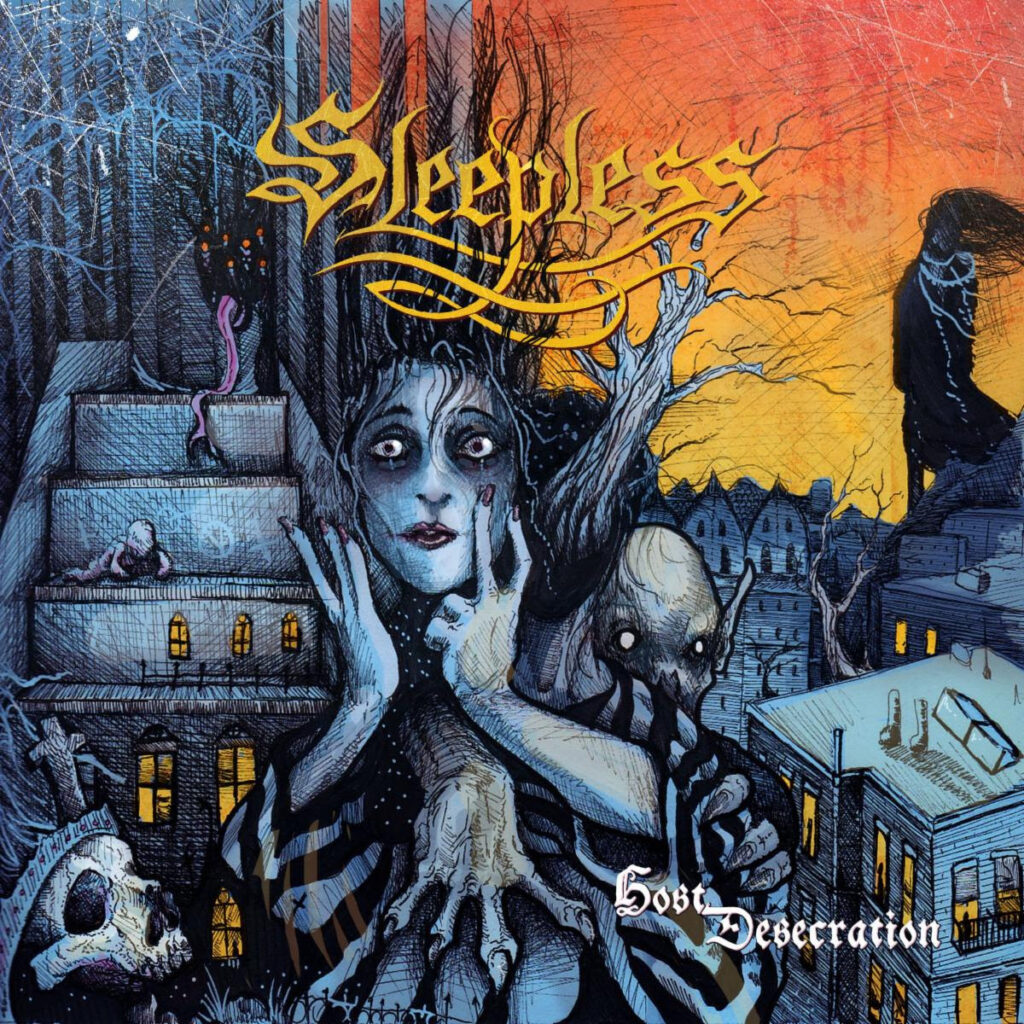 “Host of Desecration is an album of contrasts, changes, and unpredictability. It’s fresh and contemporary with an old school feel and well worth 40 minutes of your time.”
– The Razors Edge
“Sleepless blend Traditional Metal with Thrash for the most part, but also have the ability to surprise like a Psychological Horror Thriller. A thoroughly listenable record that stands out from the pack thanks to some fresh ideas that go a long way to ensuring that it will get the attention that it deserves.”
– Metal Noise
“Listeners can expect subtle shifts off main chord/riff parts that branch into progressive, off-time landscapes, however never too obtuse or twisted from maintaining coherent, cohesive hooks and enthralling melodies.”
– Dead Rhetoric
“A weighty thump of progressive heavy metal with cheeky riffs, brash tempo shifts and an attention-grabbing vocal style.”
– Games, Brrraaains & A Head-Banging Life
“It has the immediate, dense abrasion in common with many prog classics both in philosophy as well as actual content. After repeated listens the music seems to air out in the brain, and one can follow along with ease to this idiosyncratic and at times agreeably abrasive prog metal.”
– Hate Meditations
“SLEEPLESS offers the listeners Tech Metal that is close to Thrash Metal and it always plays wonderfully hectic.”
– SaitenKult
“Technical Thrash Metal and many doses of Heavy Metal, as well as experimental rhythms, a labyrinth of melodies and chords that could make you lose your sanity.”
– The Dark Melody
After the enthusiastic response to the Blood Libel EP, the Netherlands’ Metal Warrior Records approached the band about fleshing out the EP into a nine-song full length! “We never stop writing, so we kept pounding until
the work was complete, and Host Desecration starts right where we left off,” says guitarist/founder Eric Sexton-Dorsett. “Exploring the darkest reaches of the rational mind with a no-rules, metal passion that cannot be stopped!”
The EP tracks have been remastered and the song “Blood Libel” is an extended version of the original EP track.
FFO: Watch Tower, Nevermore, Anacrusis, Iced Earth, Witherfall, Sanctuary, Fates Warning and Hades.
Track List:
1. The King Who’s Not There [Video]
2. Bite The Hands That Bleed [Video]
3. There’s Something In The Fog
4. Host Desecration
5. Diviner Of Truth
6. Blood Libel (A Vampire Tale)
7. Deluded Hordes
8. Mushroom Clouds At Night [Video]
9. The Man Who Could Not Sleep
Credits:
Produced by: Eric Sexton-Dorsett and Kevin Hahn
Engineered by: Kevin Hahn
Recorded at Opal Studios, Portland Oregon
Mastered by: Kevin Hahn
All lyrics by Eric Sexton-Dorsett
Arrangements by Sleepless
Cover art by T.J. Barber